We finally met our first fellow Kiwi boat in Europe as we arrived to check out at Cavtat, Croatia! The elusive kiwi has been very hard to find in Europe and took us 5 months to spot the first one. Was hard to miss Graham and Mike with the huge black Loyal flag flying.

On the Q dock clearing out of Croatia with Amelia on watch. Thankfully the nice agent for the super yachts stopped a large motor yacht dropping their anchor over ours or we would have been stuck on the dock for two days. 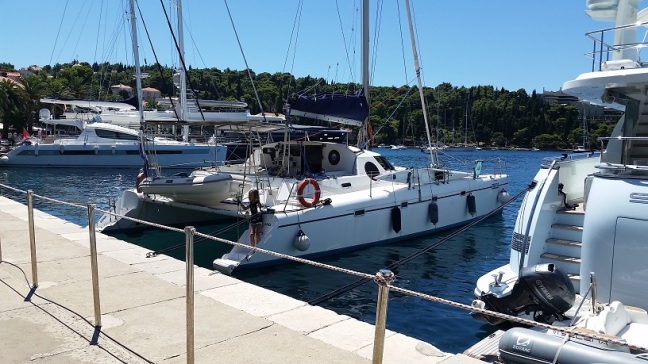 It was a lovely motor sail down the coast to Montenegro and past this fort at the bottom corner of Croatia.

Ah, checked into a new country and a short motor following our friends to a nice anchorage. 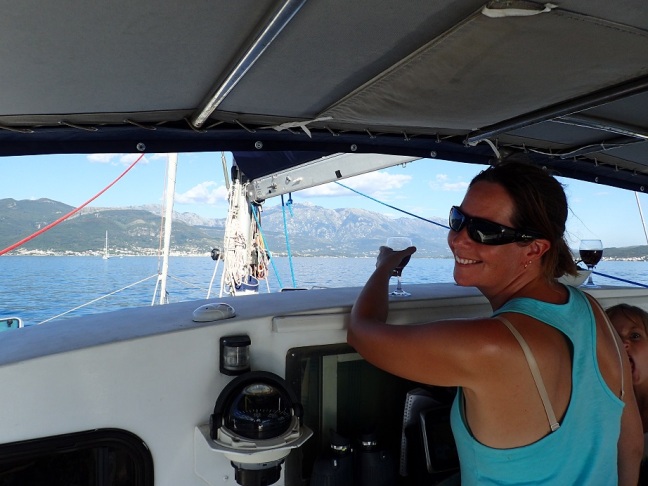 New dawn and another cruise ship heading up the channel. Beach bar on the right foreground is still deserted before the crowds and dance music kicks in mid-morning.

We briefly met Christian, Brigitta and Caroline in the stress of shorthanded med mooring on the Croatia Q dock and customs. One of the things we love about cruising are the lovely people you meet and the fast friendships that are formed. Here we had some time to hang out at Tivat with them. 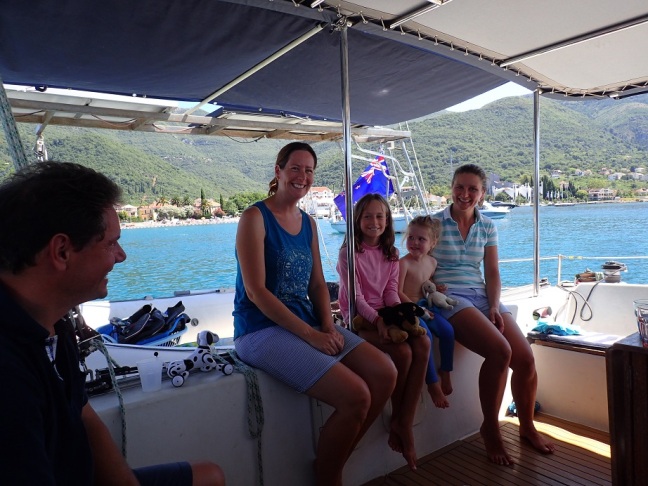 They showed us through the very fancy Tivat marina where the dolled up fancy pants parade around and gold diggers go mining. After a lovely lunch on the waterfront a tour of the marina was needed. 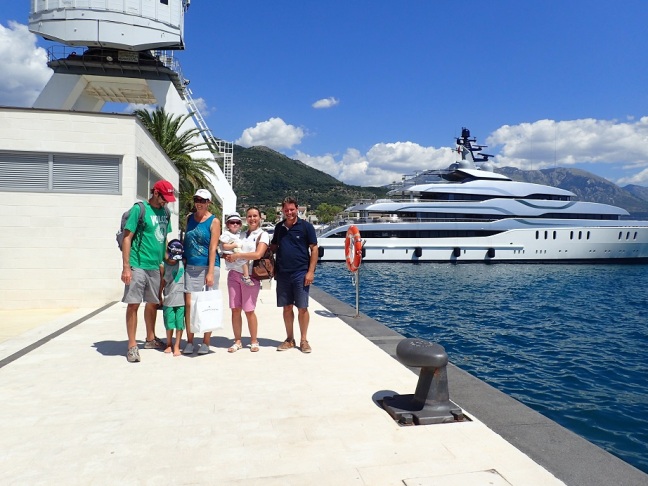 The money here was stunningly phenomenal. This is a set of 4, Yes FOUR super yachts. Because one super yacht is just not enough sometimes… Golden Odyssey is 5 levels high and 404 feet long with estimated 60 crew and belongs to a Saudi Prince. It’s so big that pictures do not do it justice. Golden Shadow in blue next to her carries the toys. Golden Odyssey 2 behind looks to be the older one or for people not important enough to get an invite to the main event. Then there was a 70’ game fishing launch that would fill many a man’s dream looking like a little tender. A huge slick of suds was around Golden Odyssey as the crew washed her down but I don’t think many complaints would be heard with the amount of money being thrown around.

Back on their beautiful boat Moana they have a dog. Amelia is in heaven! 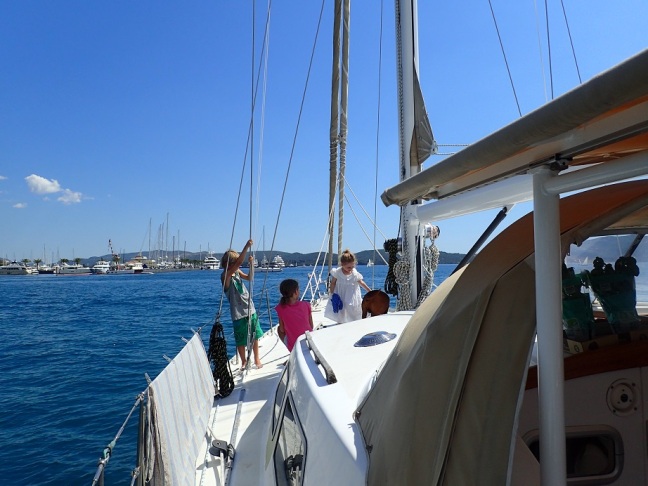 Why is Christian smiling so much?

The cunning Bavarian has a plumbed in beer keg and tap in the galley!

The rest of the boat is a credit to his skills and is proper. I hope they get to live their voyaging dreams. 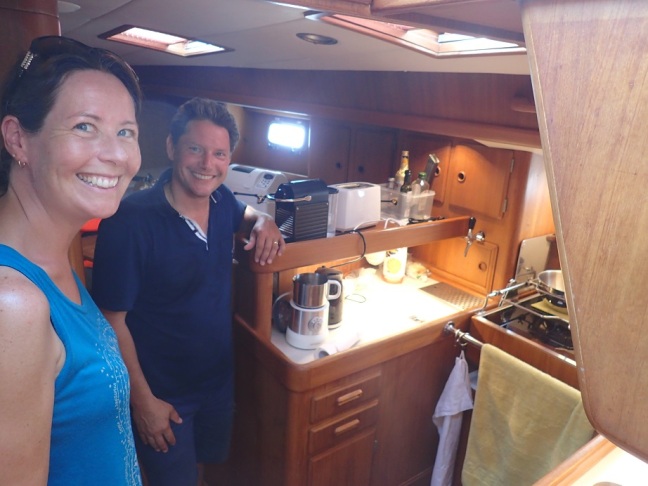 Heading around the corner up the fjord and into a wonderland amid stunning weather. 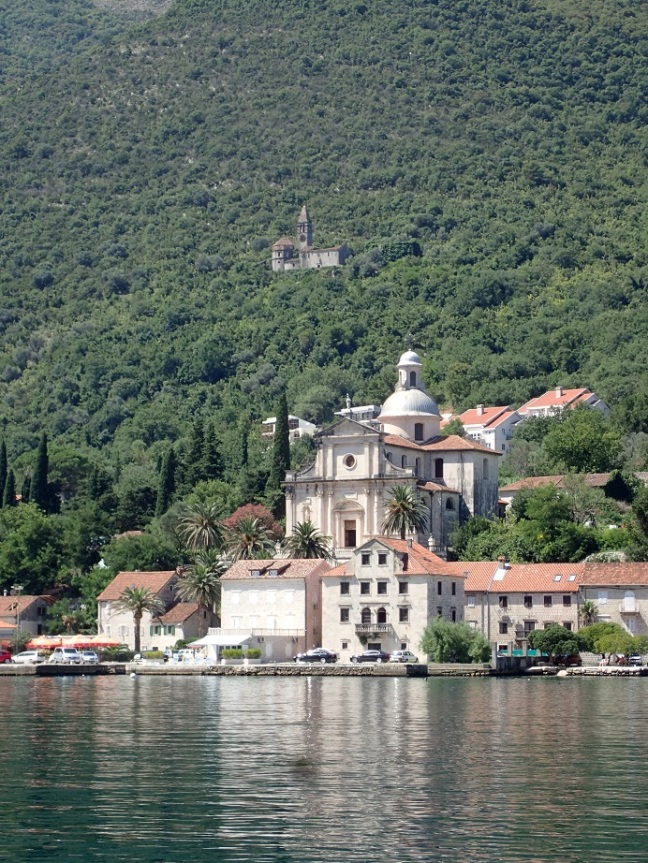 Ending up in Kotor a long way inland. This was a recommended spot. Ho hum I thought, another nice place. But it really was a place that made us go Wow. Here another cruise ship is squeezing in.

It was Hot so an early morning mission was needed. We are off to climb the mini mountain in the background. 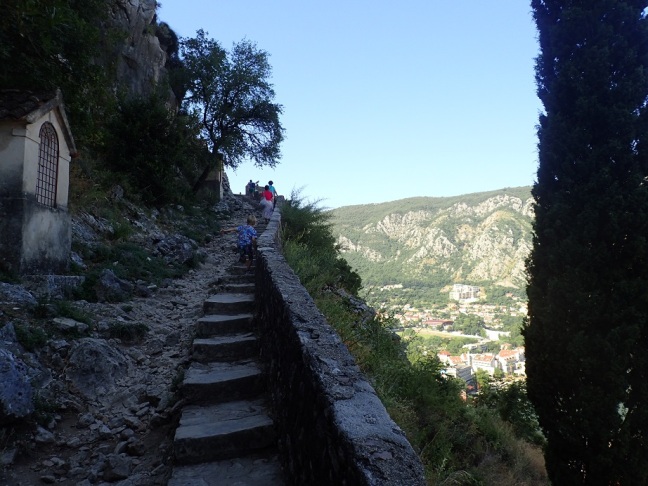 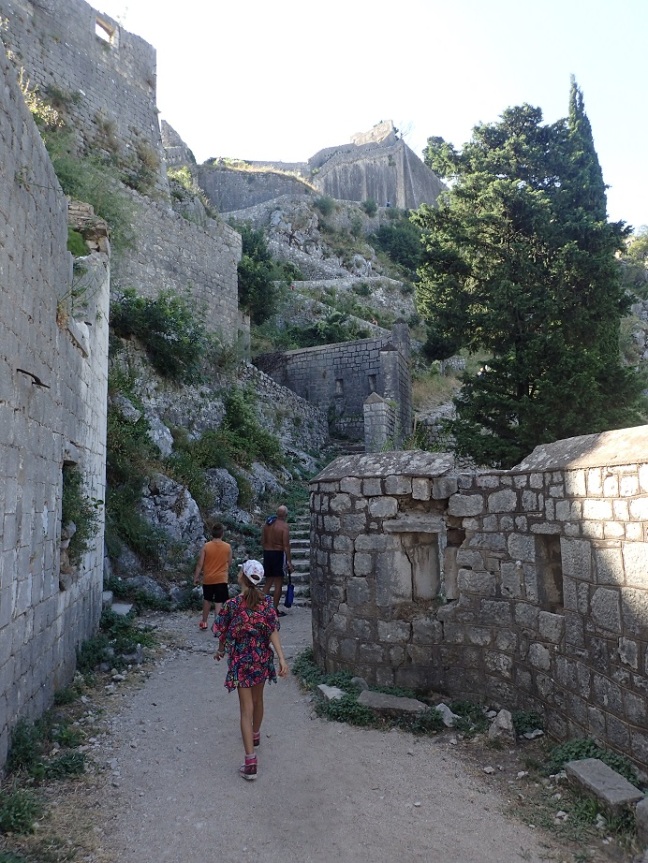 And then up some more… 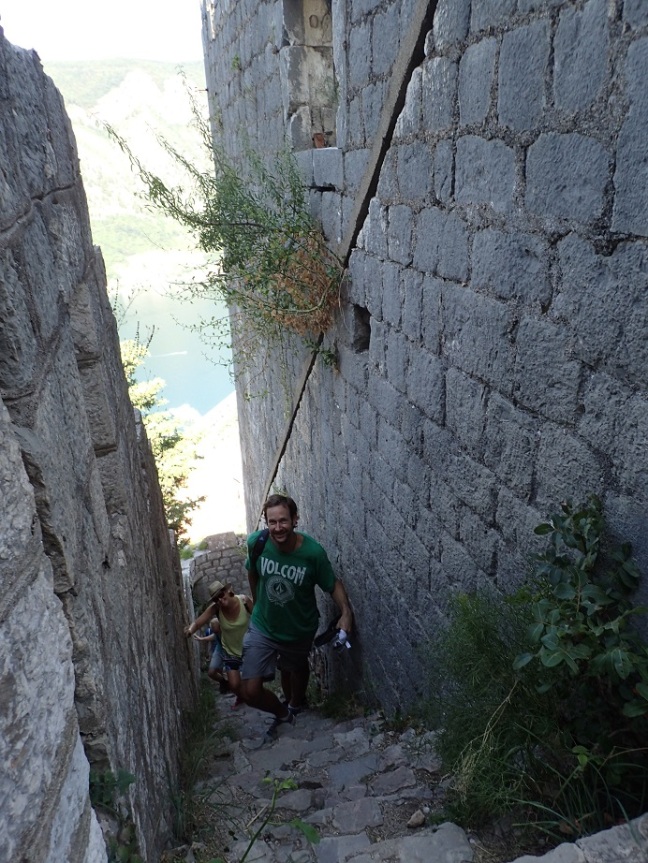 Before a pit stop in some more ruins

Then up even More 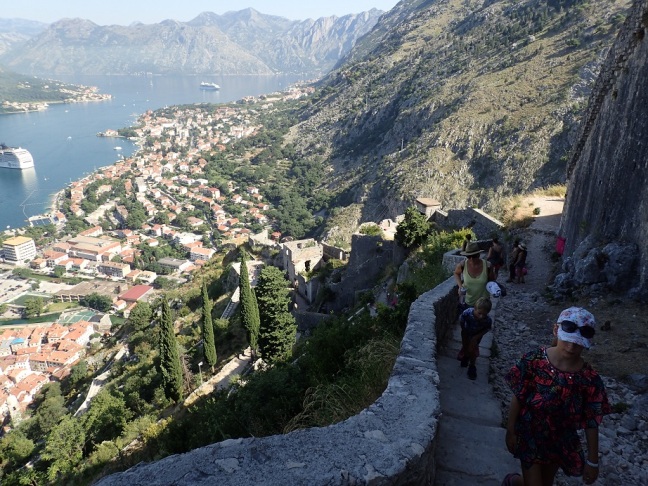 Kids were mutinous before we made it to the top, but then had fun exploring the creepy castle at the top

The way down was much faster for some reason…

The hill was so steep that large sections were still in the shade at 10am. The afternoon sun beating on the face would make it a killer climb. It was hot enough when we did it in the morning! We shook our heads as from the boat we could see people climbing it all day long.

Usually churches are camera free zones, but the lovely nun attending this little church was fascinated with our trip and asked if we knew many people in Melbourne where her son is. The kids were amazed at the mummified nun lying in state in the glass coffin complete with uncovered hands.

Ice cream refuel back in the old town trying to find some shade from the heat and crowds.

Amelia spotted a cat museum so we had to go…

Man, I need to sit down after that climb!

Pretty lights on the fortifications and walk.

Not only do they have beer on tap, they also have a freezer for Ice Cream! 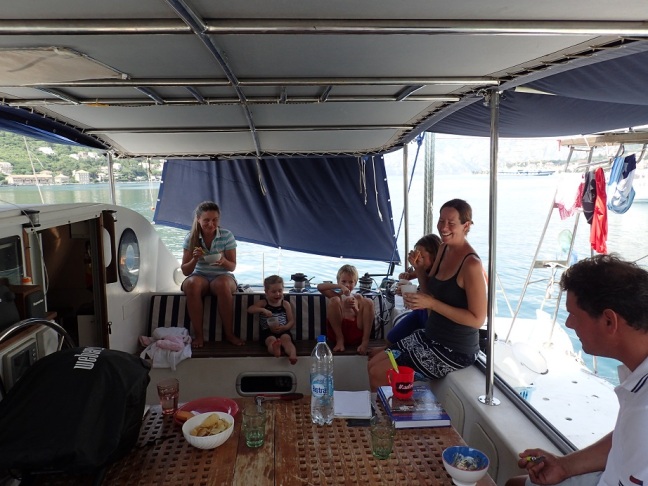 A good group of friends formed in the anchorage making it an even better place. The Kiwis from Cavtat arrived and suggested a hostel to do the laundry. Smart. Here we are heading into town with 5 loads of washing once the sun is hidden by the huge valley walls. Peter’s cat in the back ground and another cruise ship leaving.

Just another cruise ship squeezing in over breakfast. We thought we could time the shore adventures when the place was not packed out with package tour tourists, but every day there was a procession of ships and usually two in the bay! 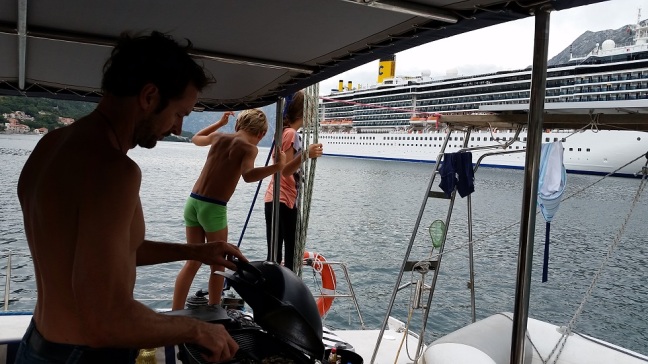 Not much swinging room here… Queue comparisons of lifestyles.

Part of the great groups of friends, the American’s Pam and Ken’s lovely Oyster 52 in front of us. Interestingly they are considering changing to a cat, (nice) even if it is a motor cat. They find the sailing is often limited in the med and frustrated at the amount of gear just hanging around for the white flappy things. Seems they have been spoiled by the layout of the Lagoon 450 that Robert and Cath have. Now that boat is stunning for living space! 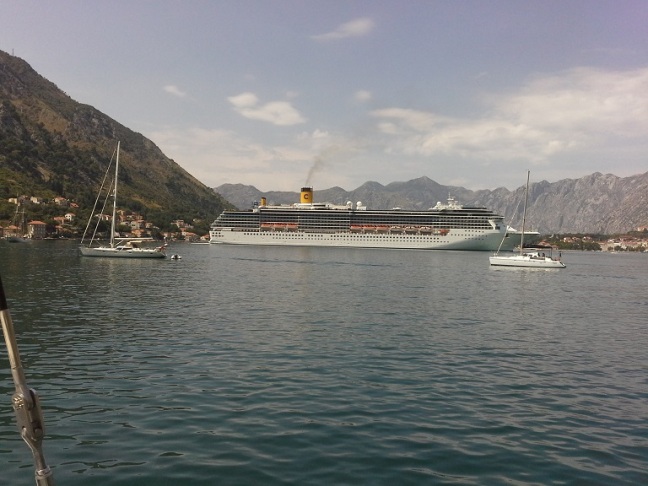 We had met Robert and Cath in Croatia briefly and it was great to catch up with them again. Nice work for them to get a new Lagoon 450 owners version. In a word, Wow. Here we are headed out to get a car to get to the big chandlery. Ironically we had better success at the hardware store further up the road before chased home by a thunder storm downpour. It felt odd to sit in traffic trying to get back to Kotor. Been a while since I have been in traffic and can’t say I have missed it.

Then it was time to say a sad goodbye to our new good friends and carry on south with the thunderstorm following us out to sea.

Insert token shot of boat work here. I’m pretty sure I can get this back together…

Heading south we found this amazing spot with tiny church perched on the top of a little pile of rocks.

Massively popular beach heaving with tourists just out of shot. You can tell it’s the high season here with every beach virtually standing room only. We passed by several coastal places that looked good on the chart and Google Earth, but were just crowded and noisy in real life. Note the fizz boat running through the bay and here on dusk it had quietened down. I did wonder at the peddle boats like you get on a lake going around us and being so far off the coast. How many do they lose if the wind goes offshore…?

The most formal clothes I have worn for a while… Headed into the customs offices to clear out of Montenegro in the not so salubrious commercial docks of Bar, Montenegro.

Well that’s a cool flag to add to the collection. Here we are beginning our overnight run to Greece. Another tough day in the office.

2 thoughts on “Making friends in Montenegro”