Early Aug 2017 and Boston turned 9! To the catch cry of all parents, where did that time go? Seems only yesterday the little bundle with huge jet black mohawk arrived into our world. It’s been an amazing journey helping you grow up my Son. Happy Birthday, We Love You Boston.

Birthday on Grand Anse beach with lots of friends. Ice cream party on the beach was a big hit..

Here the kids are gorging on the local super sweet ice cream, fleet of kids boat dinghies are in the middle ground looking back up the long white sand tropical beach… 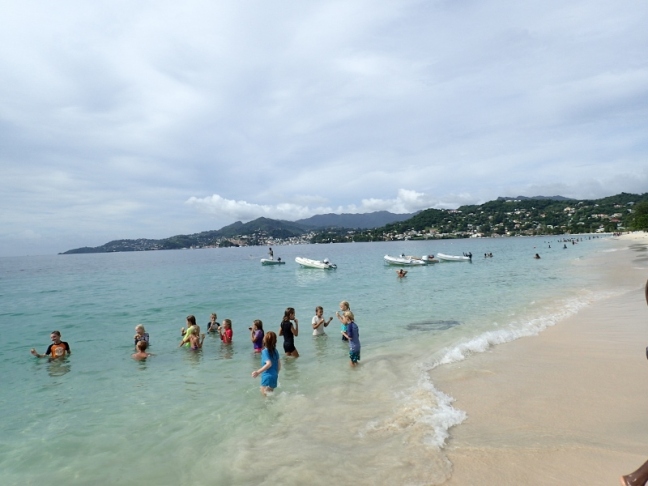 We were blown away by the effort our friends went to. So cool to have homemade cards and gifts, intricate origami, home made cookies etc! No cheap plastic disposable toys here thank you. 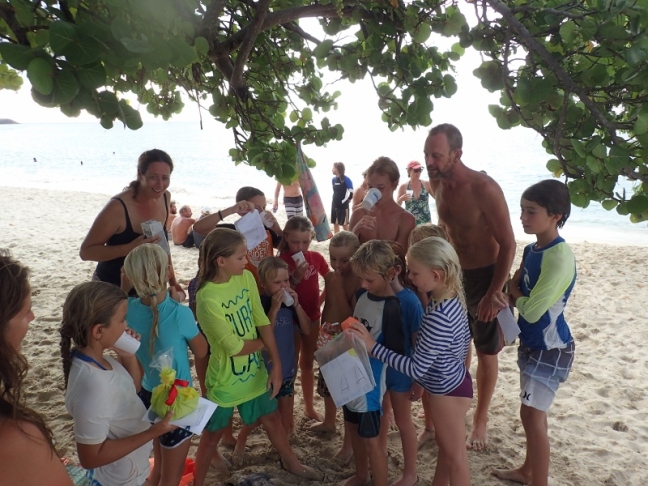 Parents were not exactly roughing it, fixing the worlds wrongs and chilling out into the sunset.

Sleep over time. Loving the Lego! Note the difference to the first shot where we had been working hard to tidy and stage the boat and get her listed for sale. It was a fair bit of work trying to get very good and accurate pictures of the inside of Drakkar with a normal camera. Just finishing several days work and two friends offer wide angle lenses. Ah well, it’s all done now… 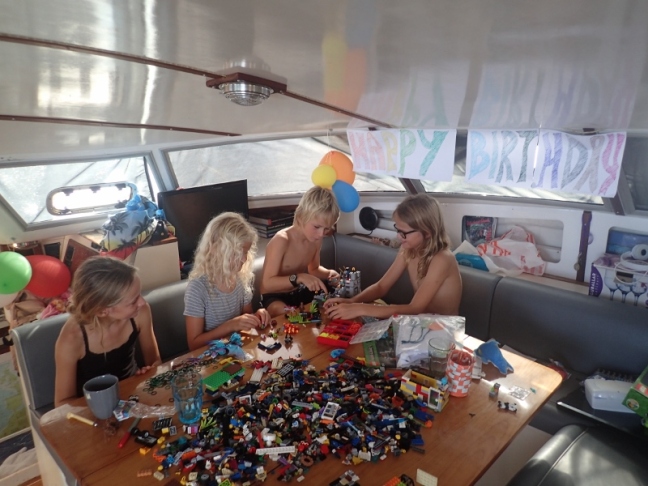 Another awesome afternoonsies, this time on Una Vida where the foredeck was taken over with a mini projector for the kid’s movie. From their rapt expressions it was a success and the parents were hardly bothered all night except to put the next movie on.

Sailing school continues. Today Amelia is out with her friend Millie trying to find some breeze while I work the yacht club’s wifi hard listing the boat for sale.

Noooooooo, the first boat of the fleet is heading away! The repeated goodbyes is a downside of making so many great friends out cruising. Blue Zulu is the early mover headed west and downwind. Miss you guys! Fair winds friends until we meet again. 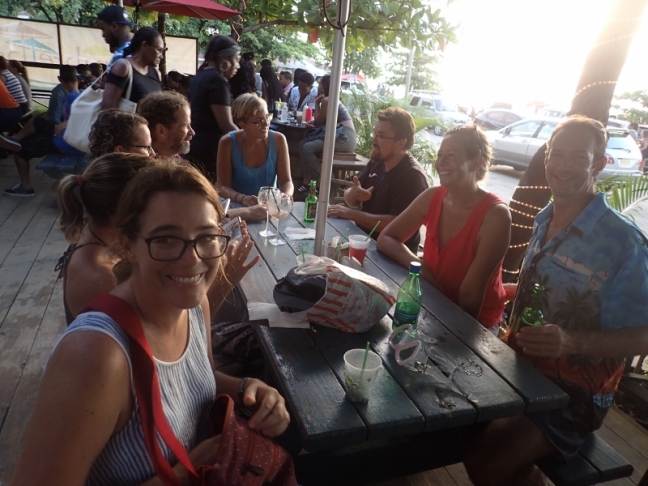 Coming out of the beach bar sometime well after sunset we came across a local lady who had managed to lose EC 2,000 cash (NZD 1,000!) from her pocket. Oh Dear. Kids were quickly on the case and managed to find a little over EC 1,000 soggy dollars. As thanks she unexpectedly gave the kids EC 100! Very nice and funded some well appreciated small tubs of ice cream for all the kids the next day.

A little everyday local scene. Fishing boats tied up in the inner harbour outside the local small supermarket. We will snuggle the dinghy in between them right outside the door. Note the rubbish blown into the harbour and guy fast asleep on the aft deck of Trinity.

Something that is hard to capture in photos is how much the Caribbean like their music, played very loud on Big sound systems. Carnival is coming and the bars and parades are building to a crescendo clearly heard at keep you awake out in the anchorage off St George. To escape the noise pollution of the local suka music we headed up towards Carriacou for the weeks holidays from sailing school. First night afternoon just up at the statue park the carnival came to us with three party boats literally loaded to standing room only and carrying the compulsory massive stereo came up for a couple of hours of trying to drown each other’s music out…

Very quiet underwater as we explored the statues trying to find as many as we could. 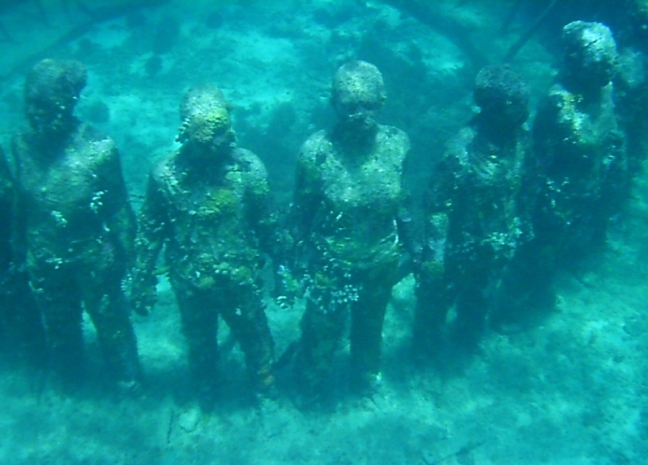 Hmmm, this one is maybe a metaphor for me as we get ready to return to land life and the office? 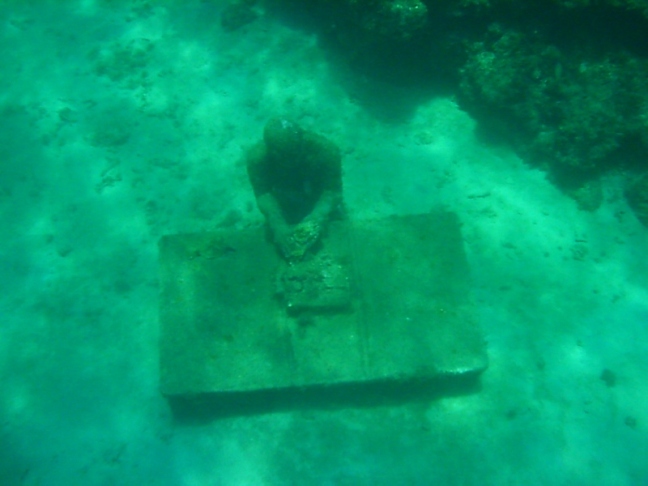 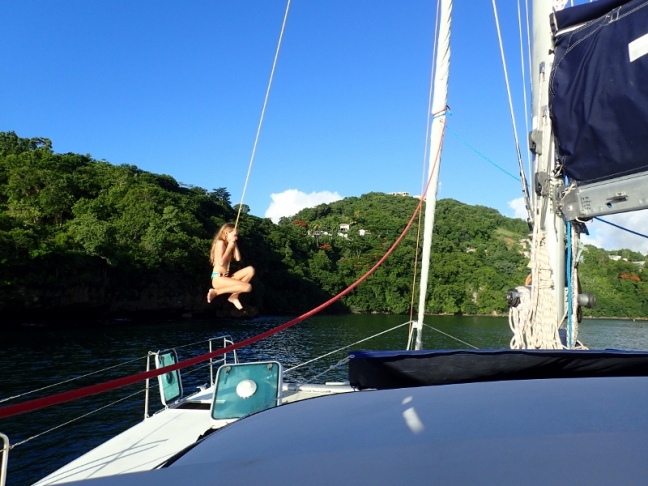 Cesare’s most excellent gift of the drawing set being out to good use. Another good friend we are missing!

Some more boat chores. Might as well find a nice place to do them. Round windows had just started weeping so time to re-bed them. 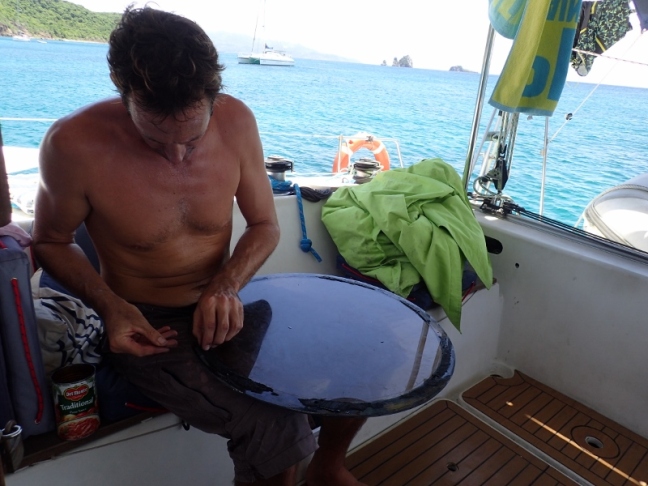 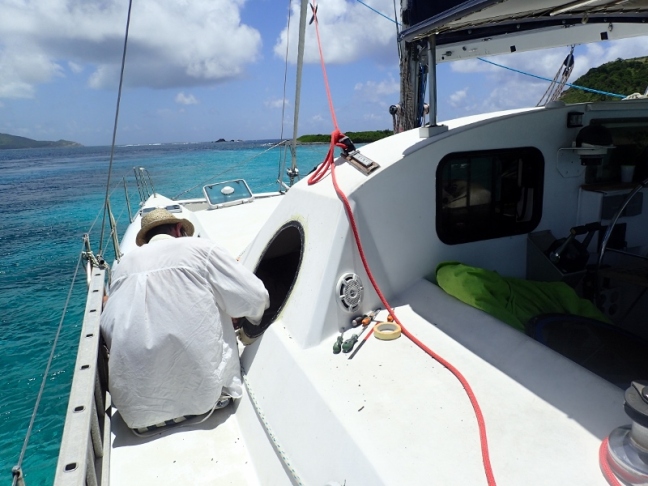 And what a spot we found! Saline Island tucked under Carriacou is an idyllic spot! Just Wow! Here we were well onto the roller coaster ride of selling our beloved Drakkar. Suggested earlier in this post was the work done to stage her for good photos. Hours more work was needed to get the advert written and posted across different platforms. We were swamped with interest which was fantastic! Within 3 days of listing we had 2 written offers and on the 5th day had a verbal sale agreement with a nice Australian family. It was a bit surreal sitting in such a stunning tropical location and having 4G cellular internet to work with international inquiries.

The bay was even complete with a ruined little castle,

Which had a bat cave and a few little cuties in residence!

Our addiction to watching the weather stepped up a notch as a suspect system intensified and approached. Tropical storm Harvey was forecast to brush us with winds clocking the compass as it ran through to the north. To play it safe and as good practise we headed into the mangrove lagoon in Tyrrel Bay. Ironically the worst weather we had was just as we picked up anchor in Tyrrel Bay the morning to head into the mangroves.

A few hours of work later and Drakkar is snugged down to her three anchors and eight lines into the mangroves. Phew. 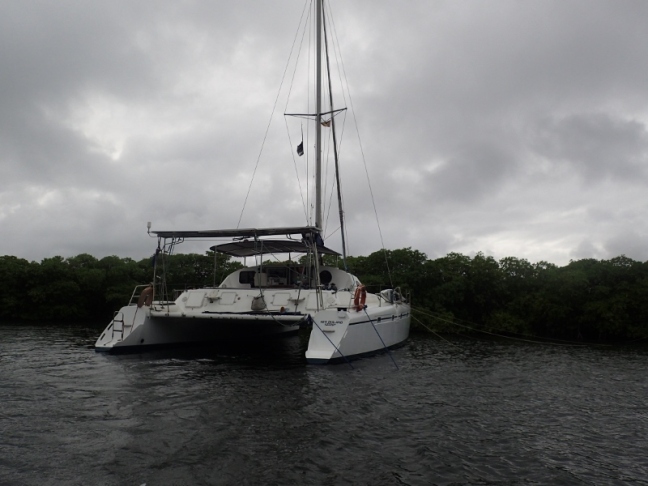 What to do while waiting out a tropical storm? Hunt for fish 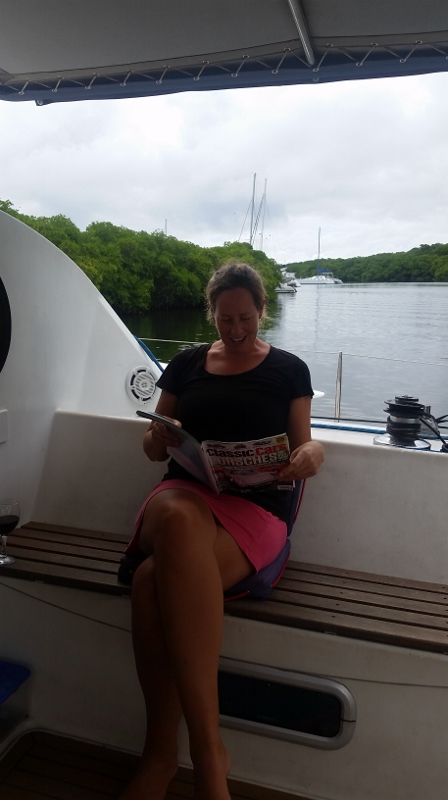 Thankfully Harvey was another fizzer here and the biggest danger was hyperactive kids. We had a maximum of 12 knots in the lagoon and only a third of the fleet bothered to come in, and some of those just anchored in the lagoon. In the anchorage they had less than 25 knots maximum. But we were happy to be in as it doesn’t take much of a variation to make it serious. Harvey faded out after passing us and lost its named storm status. Only when much closer to USA did it quickly intensify into a hurricane to pound the states.

Back in Grenada for the last week of sailing school it was great to catch up with our friends from Maple. Noooooo, another boat heading out, they were working us hard to follow on the downwind run west. From the beautiful pictures they post it looks amazing and we are sorry to miss that bit for now. Another miss you and fair winds until we meet again friends.

Hmmm, a beautiful picture but not a fun place as the sun set on our first buyer. Our buyers got cold feet after 17 days negotiating the contract they suddenly decided it was a non-standard contract? Ah, What? What have we just been doing for the last 17 days but re-writing it to suit you and reflect our verbal sale agreement? They had not even seen the boat! Our mistake was believing them and putting off all the other interested people. Now we had lost significant time and market interest. Here goes the roller coaster. Back to all the interested people, re-market her and try to explain there is no problem with the boat. Back dealing with tyre kickers and low ballers. 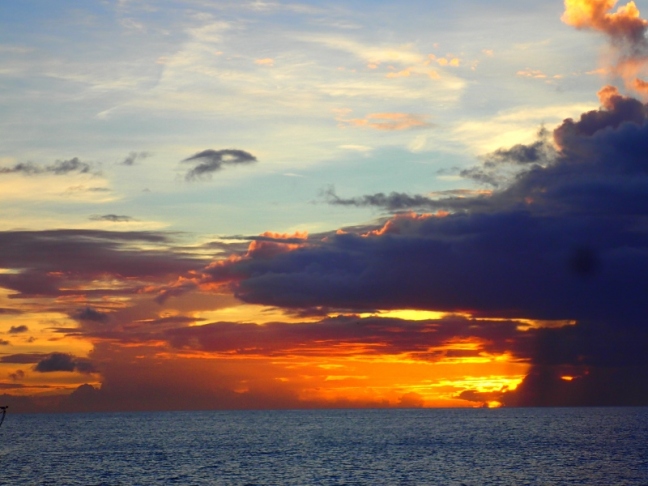 The eclipse is coming! Nahanni and Pierina were organised and the kids made view boxes at the yacht club.

It was cool to see the kitchen and back room staff shyly come out one after another and the kids show them how to view the eclipse. 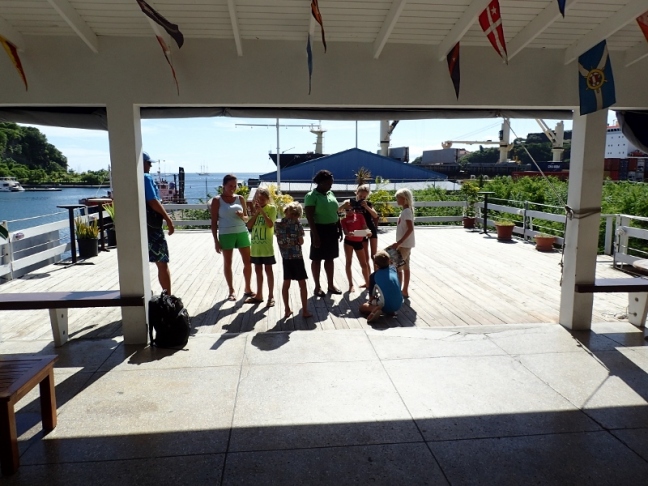 We discovered binoculars projected into a shadow gave the best result. Cool! 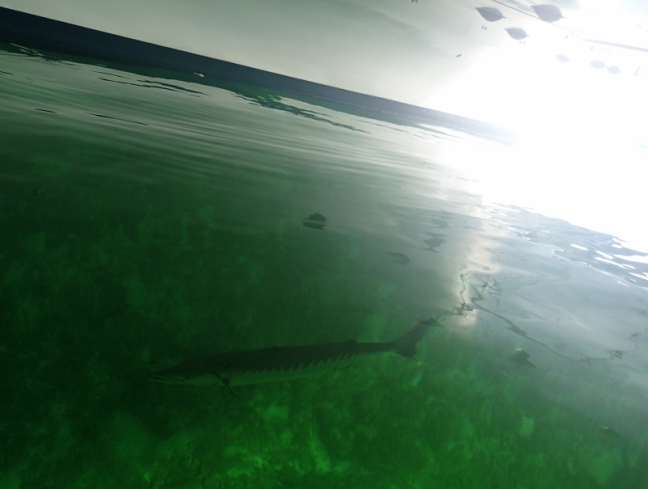 Last days of sailing school were capsize drills. Why didn’t we do this first so the kids weren’t so scared of it?

Boston had become quite proficient solo sailing which was very cool to see considering how troubled the early learning was in the shifty, light and then strong gusts.

The PhotoBomber, Itchy Foot, a proper Halber Rassey cruising yacht. They have just reached Colombia!! Missing you guys too! 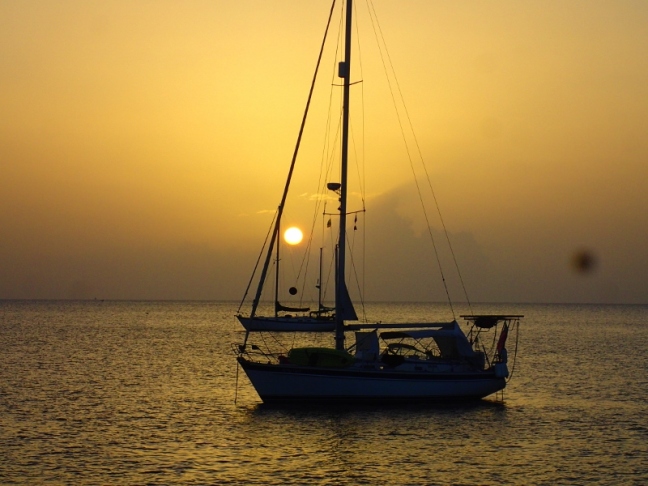 You know you have a big boat when you have a stadium for the afternoonsies kids movie… Cheers again Trismic! (Lagoon 450)

With the frustration on the sale process and the end of the sailing school we headed back to a favourite secret spot of Saline Is. We had secured another written offer and we working out details when they also pulled out citing their teenage daughter. Hmmm, was always going to be a hard sell for them to get a teenager girl to live aboard if they had not been sailing much before. We did our usual cautious anchoring on arrival. This time taking three tries and two swims to be happy with how we were set in the little reef anchorage. Next day I was very glad, oh boy, that is the mother of all squalls coming! 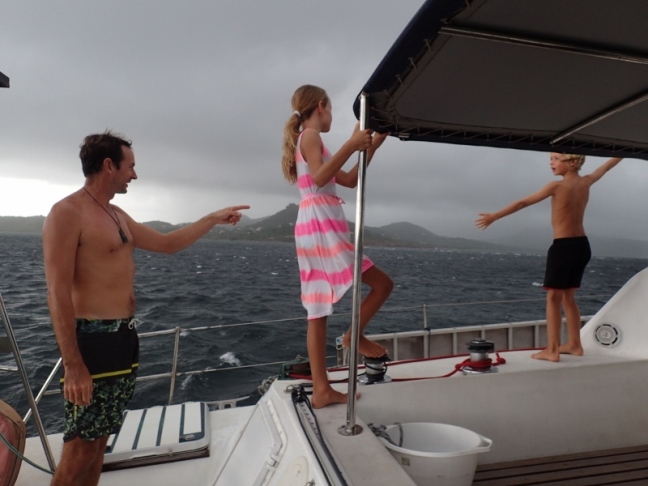 Just before it hit the local spear fishing crew came flying around the corner to find shelter arriving just as it hit. They couldn’t get their anchor to set in the 40 knots so I waved them over to tie onto Drakkar. Most of the crew were back in the water still working but we had a great yarn with Josiah. One of the lightning crashes induced a little shock on my hand as it accidentally rested between the traveller and a bimini pole!

They were very grateful and nice guys. Their skiff was a real thing of beauty built by Josiah’s brother and in first class condition. Squall has passed and off they go to pick up the crew from the water. 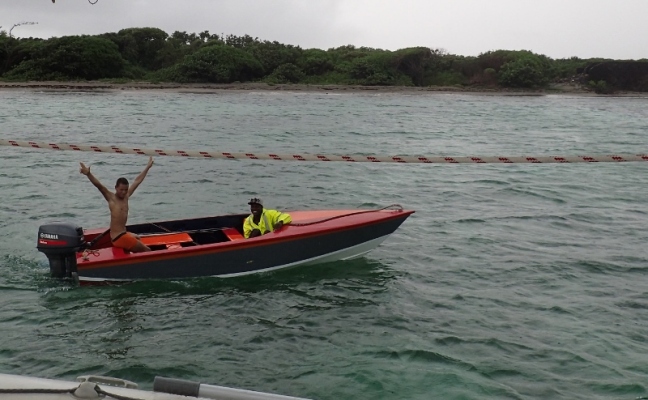 The next day they came past with cries of “Respect mon!” and gifts of a tuna and lobster! Wow! They lobster was still alive and the kids were not keen on cooking it so it was quietly set free once Josiah and crew were around the corner. We snorkelled after the lobster as it recovered to love another day. As it staggered back down into the 9m deep channel skirting the bay we nearly choked with laughter on our snorkels as it farted three times purging air! Tuna was already dead so was prepared respectfully as a lovely snack.

Peak a boo, I can see you. There is a lovely little coral reef in the east end of the bay where we spotted a great variety of fish including this clown like puffer fish. It is the silliest looking cartoon fish we have ever seen. It was comical watching it swim away and try to hide. Other sights were tuna and barracuda harassing the resident school fish in the channel, turtles, a whole library of reef fish and even an octopus.

Drakkar signing out with a sunset from Saline Island.