Another post needing a re-write with a heavy heart. I had started this section about one of our favourite islands when Maria was a little tropical storm and barely named. Wow did she get big and angry fast intensifying from tropical storm into cat 5 Hurricane within 48 hours! Dominica is one of the poorest islands in the Caribbean when measured on per capita income, but one of the richest in smiles and happy people. So these lovely cash poor people sent their container loads of emergency supplies to help their brothers in the northern islands devastated by Irma, then 2 weeks get absolutely hammered with a direct hit from another cat 5 Hurricane! There was very little news coming out of the island shortly after it unlike St Martin and the BVI’s. Stories making it out of the damage, looting and armed robbery of boats arriving with aid were heart rending. Thankfully the situation is improving thanks to the efforts of many. We made a trip to the big hardware store and added our contribution of materials to one of the boats going north. I would urge everyone to be the change they would like to see in the world and help where they can.

Thankfully the American talking heads news services have realised there are affects outside of mainland USA and started talking about them instead of just Florida. Ah, hello, Porto Rico and US Virgins are American as well… Let alone all the other places the hurricanes have tried to wipe off the map. Also thankfully the reports on the rebuild efforts in the northern Caribbean are well underway and there seems to be a surprising amount of resilience. Perhaps not so surprising when you consider how beautiful this place is. 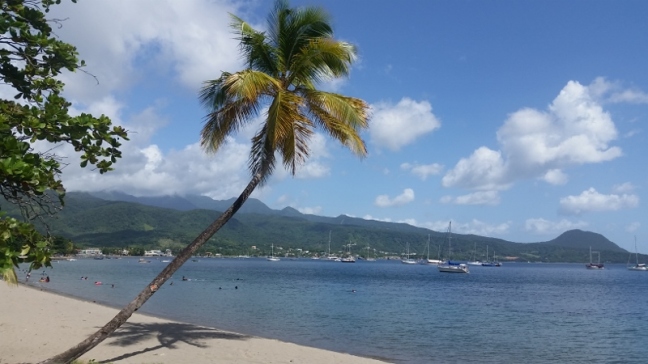 We had heard great things about Dominica and were looking forward to getting here. The guide book promised that of all the Caribbean islands the original white explorers would probably only recognise Dominica. They seem to have got the balance right without attempting to join the consumerist rush but enough to look after everyone. Alexis the PAYS (Portsmouth Association of Yacht Services) member gave us a very friendly and no pressure welcome with a huge smile from his wooden skiff. A lovely change from the often surly boat boys in St Lucia.

Man, the produce here is Amazing! Not so amazing was expecting the surfboard mounted fruit vendor to come back with change as we did not have small EC notes. Ah well, he had a good polished story that had us feeling a bit bad for him until he tried it on with each boat as they came into the bay. A pretty small hiccup really. Still feels a bit odd to consider we must appear hugely wealthy as we swan around in our boat on a long holiday. We are so lucky to have the opportunity that 10 years of hard work has allowed us to do this. The guy sleeping rough and selling fruit out of the bush from his battered surfboard sees us as a meal ticket no matter how much of a budget we feel we are on. 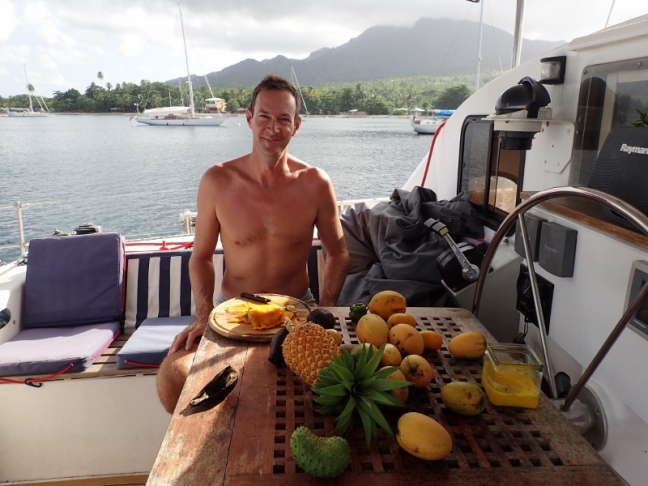 Love the islands. Sign in the middle of the road behind us says; “Court in Session. Silence Please.” 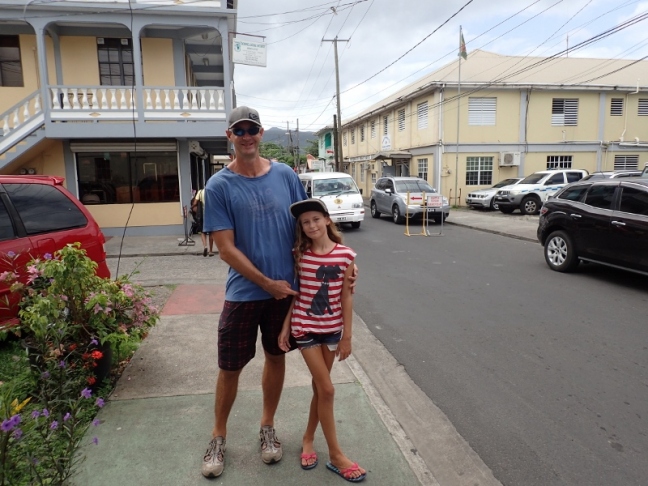 Totally awesome beach cafe Madiba in Prince Rupert Bay, Portsmouth. We went to use their wifi and stayed many times for their great food and service from the lovely owner. Their FB page has no mention of how they are now. We sure hope they are all OK and it can be rebuilt. 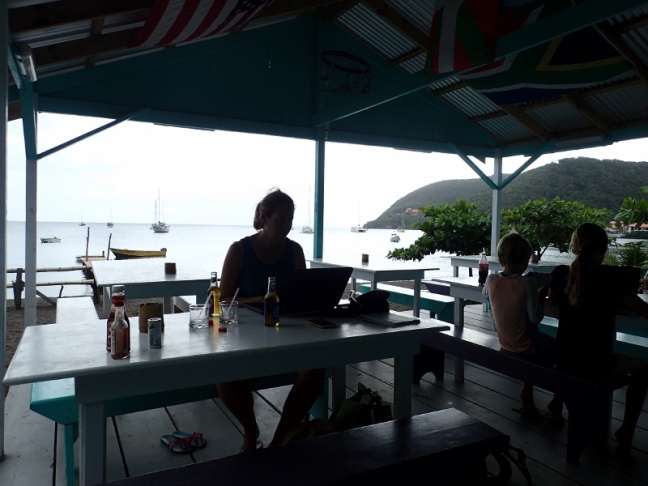 Because we are in the Caribbean… The kids had been asking to see Pirates of the Caribbean ever since we got on board. So we called it homework and research. And one of the things needing to be done was to visit some of the filming sites for it. 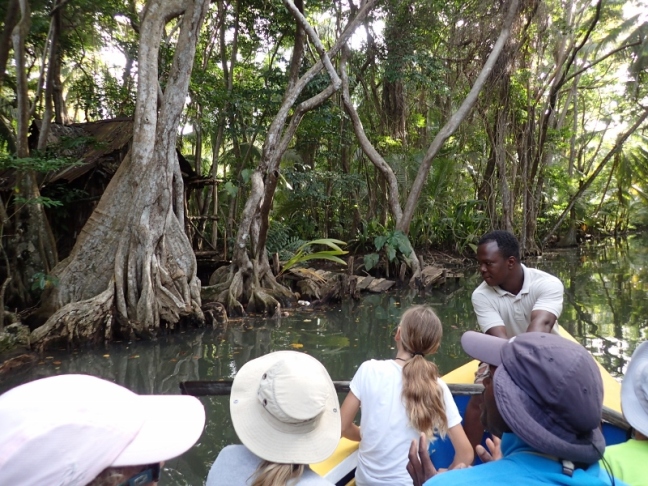 Doesn’t look quite like it does in the movie… Very cool house for the local bats. 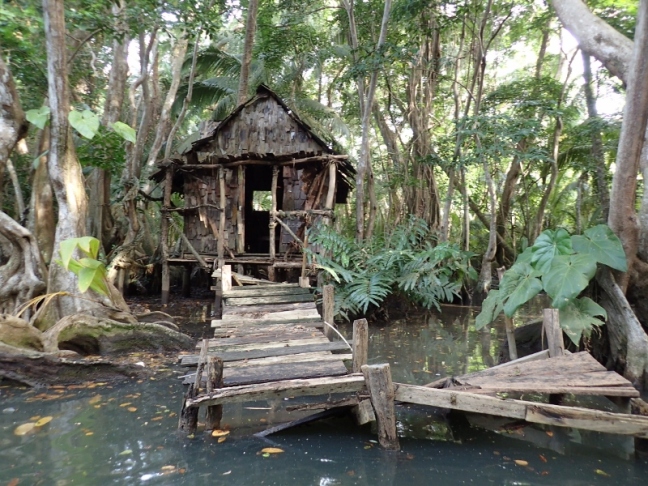 Alexis is a great guy. I can see why he is successful running tours. 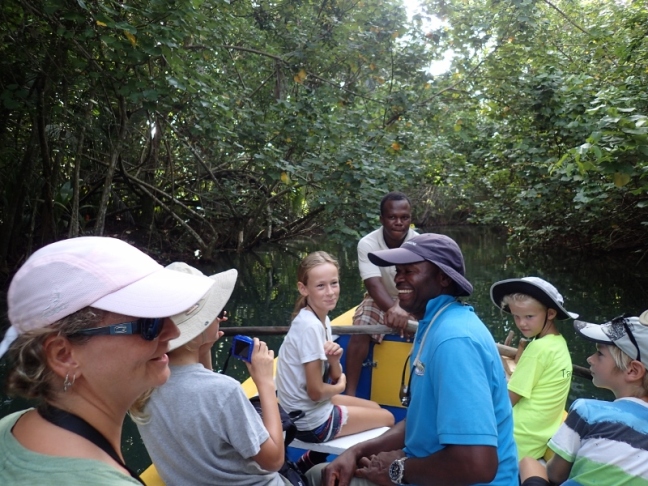 Part of the great river tour included a walk through the forest and adjacent farmland with many stops to explain and taste the verdant growth. 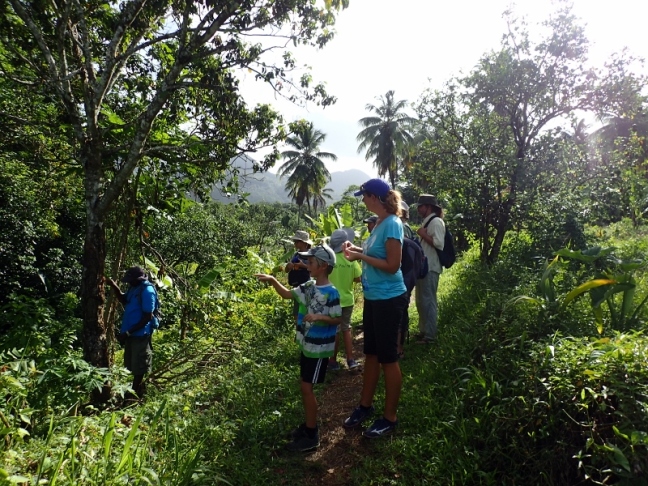 Who knew pineapples were grown on the ground? 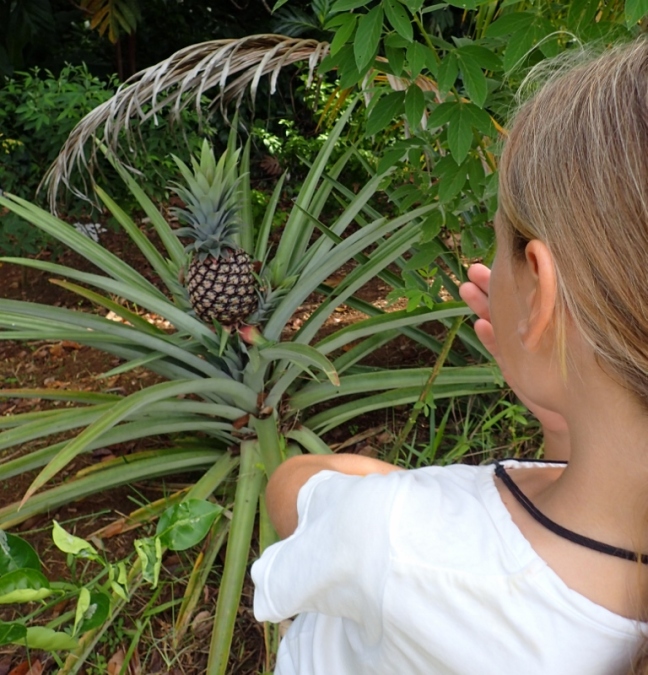 Sugar cane doesn’t get much fresher than this. Note the kids queuing up for a sample… Just visible top right is the yellow rum shack bar where a miscommunication nearly had our kids drinking a rocket fuel rum punch. Guess no alcohol in the punch didn’t translate very well into the Dominican version of English. The lady’s expression as I was about to pass the punch to the kids was comical! I didn’t ask what the recipe was but Shannon and I were happily lit at 9.30am and bought a bottle. 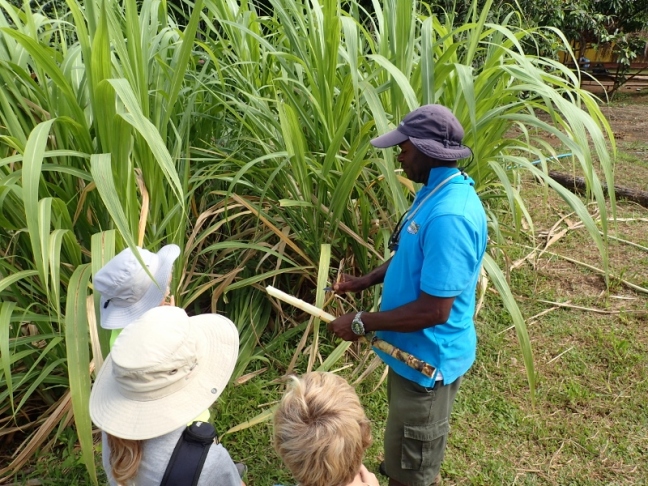 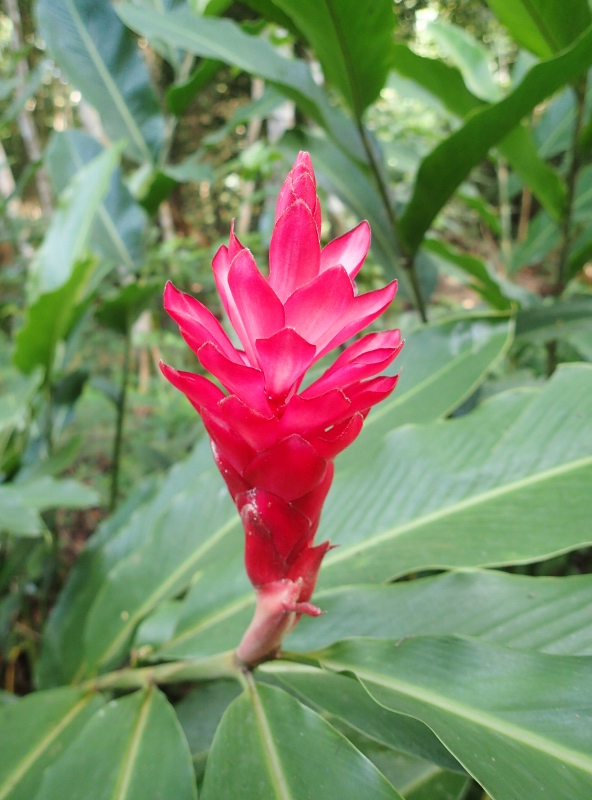 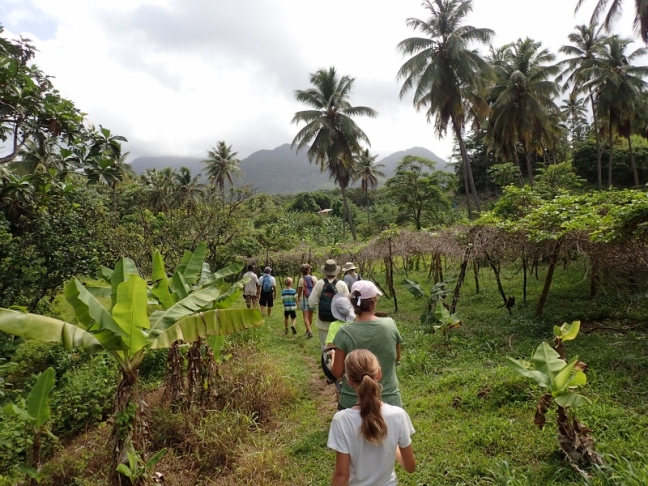 Phew, got through the morning school work which can be Very hard work. Chores done and now it’s time to play. Nahanni’s rigid dinghy is awesome. Here the kids are off on an adventure. 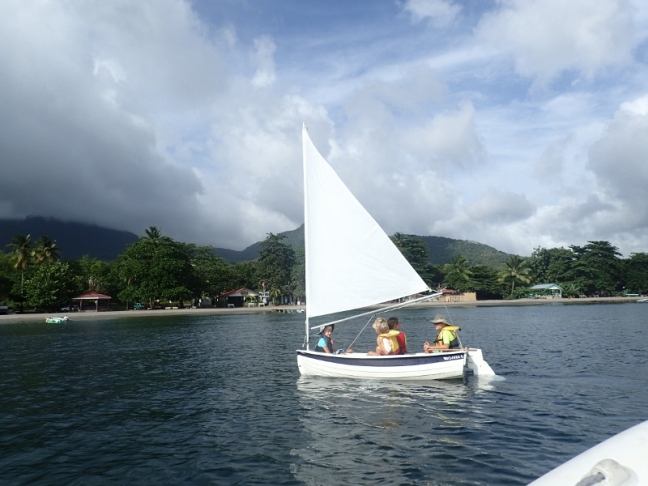 FB shot back at Madiba beach cafe. Honey, don’t worry, I’ll look after the kids as they sail to the beach to play… 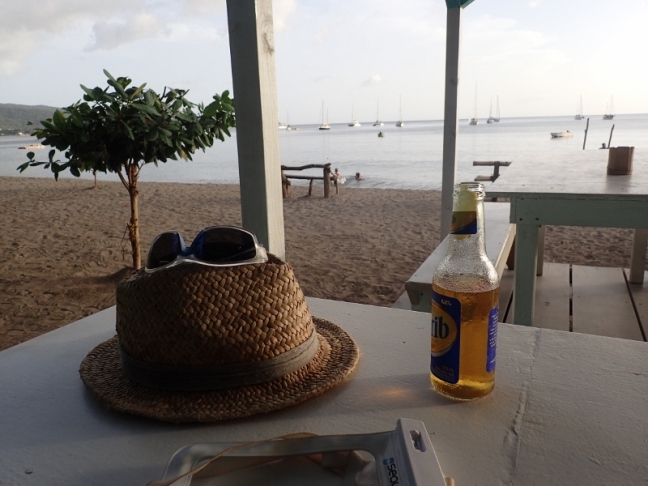 Island tour was very interesting, here are a few photos from it. 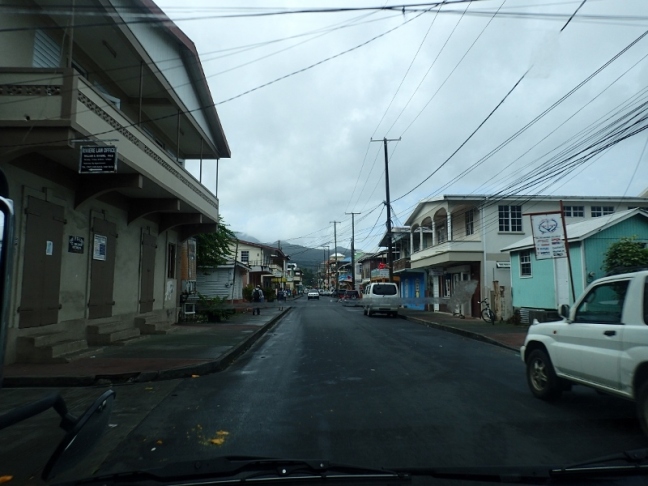 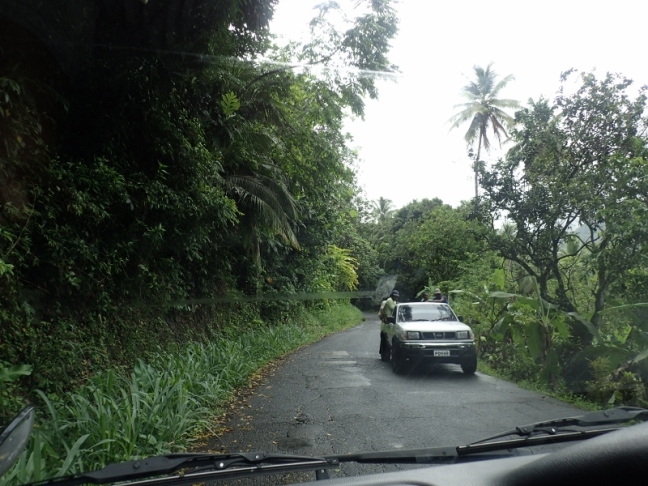 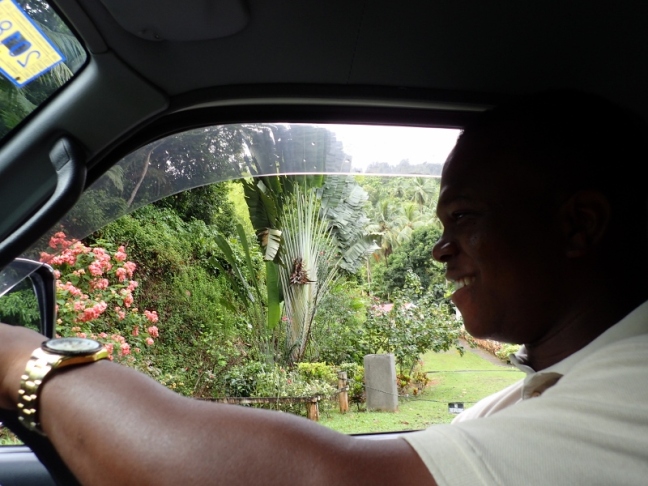 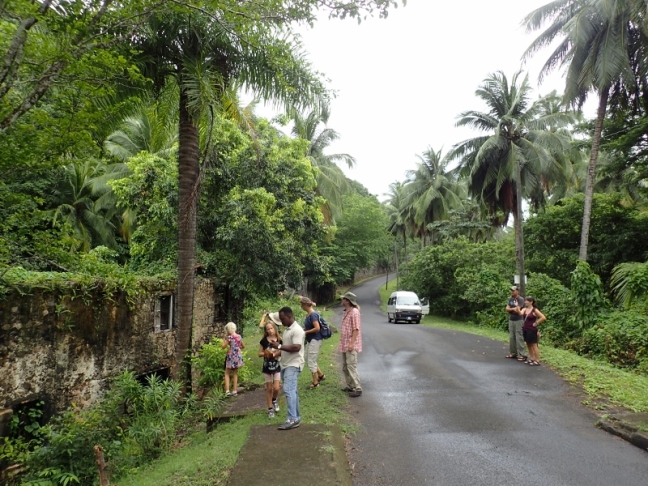 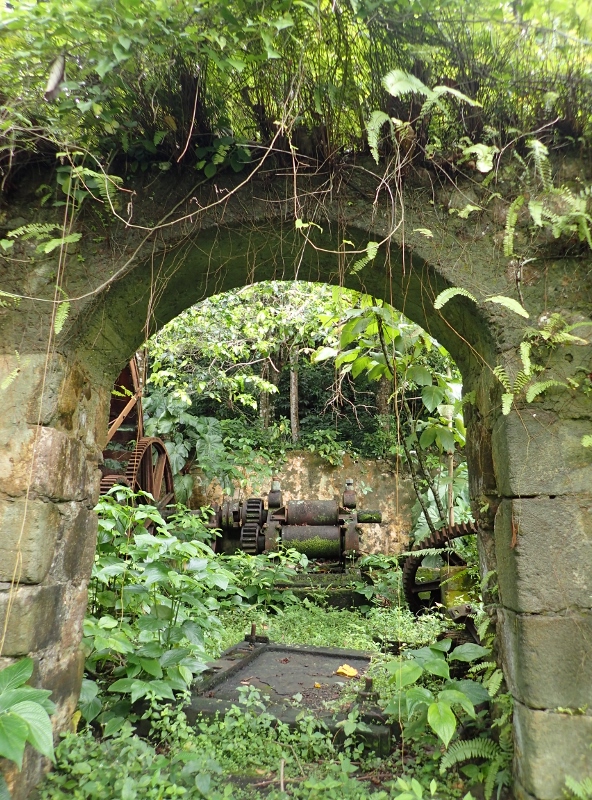 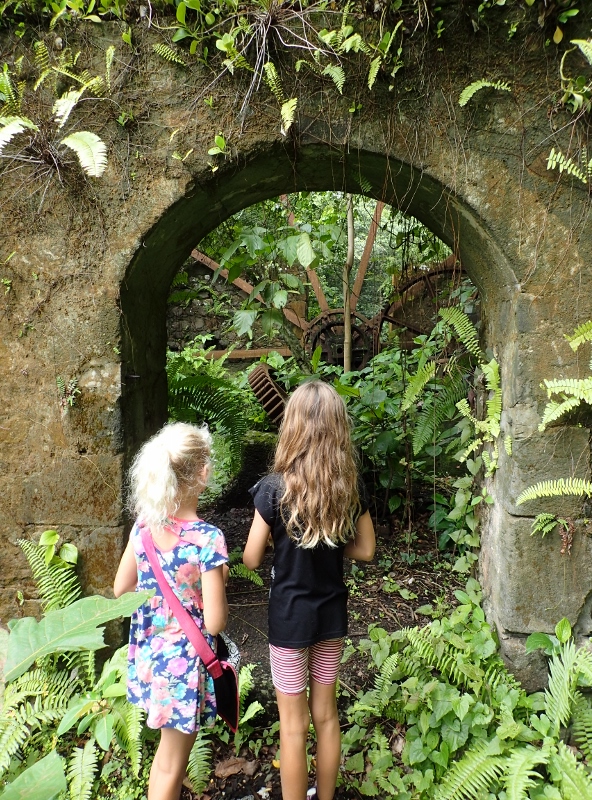 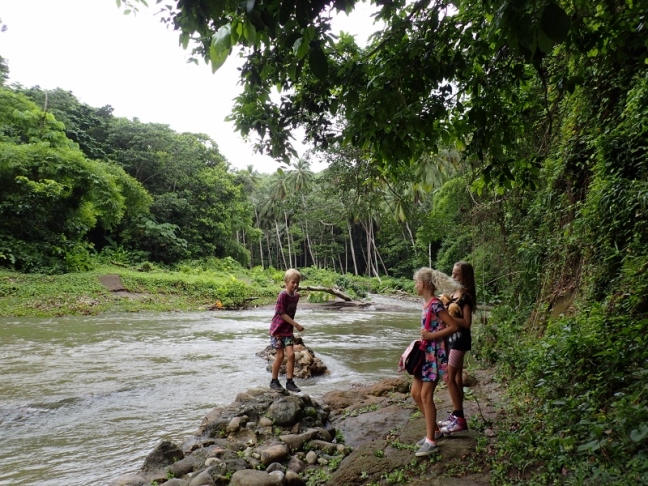 Another filming location from Pirates of the Caribbean after a hike down from the road to the beach less travelled. It was amusing that all of the coconuts had to be taken down so as not to risk the precious actors. Nice to see a windward beach almost completely free of rubbish that is so common. 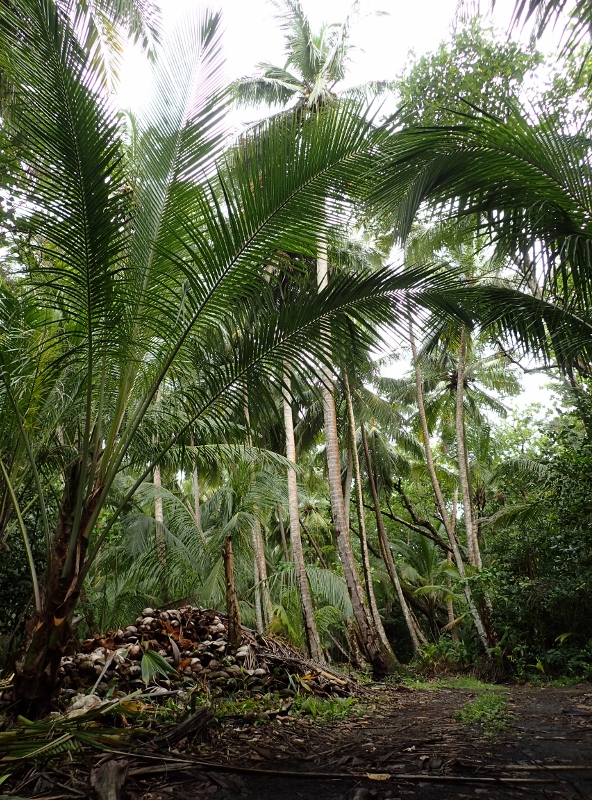 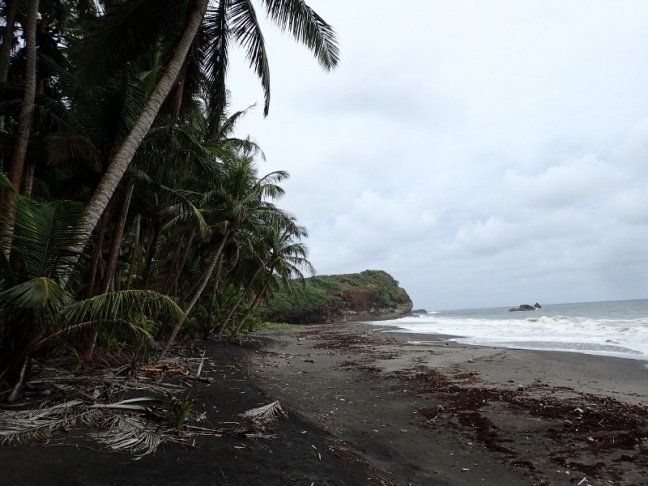 Stampede to the Chocolate Factory! More of a small house scale operation than the factory sized one the kids were hoping for. Lovely timber work on the upstairs accommodation being built. 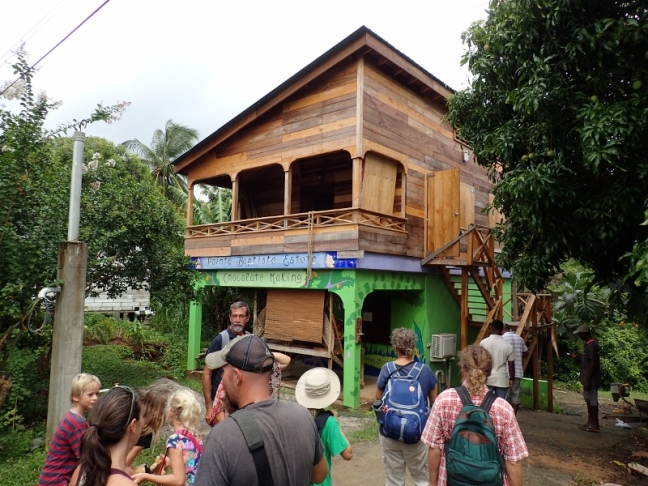 At the Kalinargo village a big hit with the kids was tossing flotsam into the stream tumbling down the rocks into the rugged beach. Not so good for parents nerves. 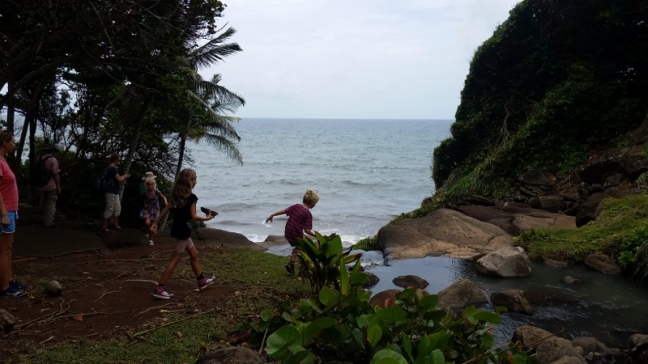 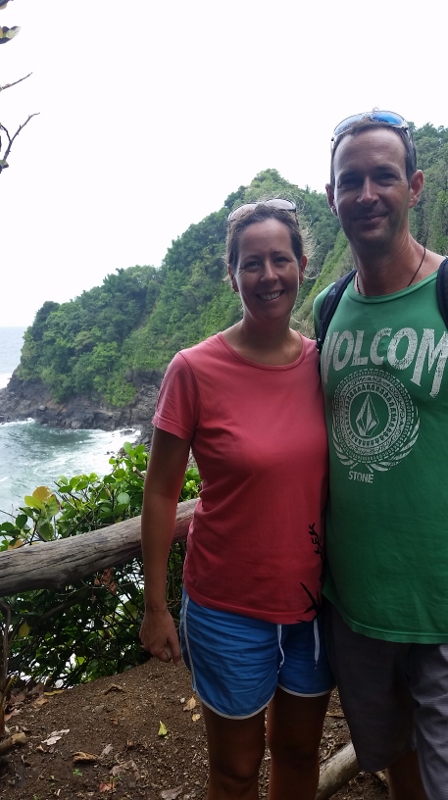 The camera died by the time we got to the stunning bush walk and one of the many waterfalls. Phone was struggling with the contrast unfortunately. Amazing place. 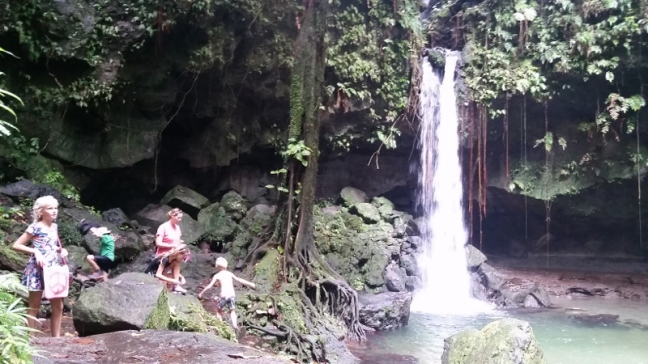 Hiked up to another fort on a hill protecting the bay below. This time it was Fort Shirley overlooking Prince Rupert Bay. Saw my first decent sized snake slithering off the path along with the usual countless lizards scurrying away in the brush. 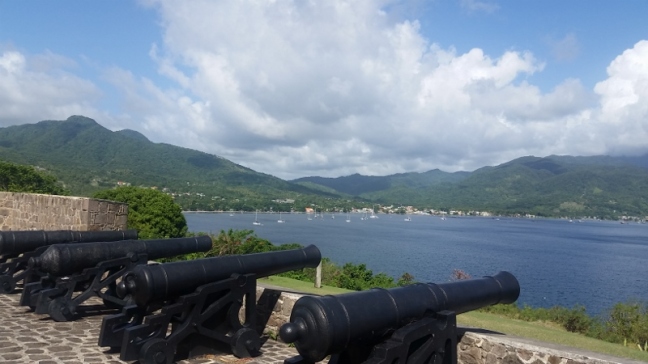 And after another too short a stay we were headed south again on 17 Jun 2017. Stunning scenery of the rugged jungle clad hills of Dominica as we sailed south towards Martinique. We hope all the lovely people we met are OK and the rebuild will not be too difficult. Our hearts are with you guys and hope you get back on your feet before too long. 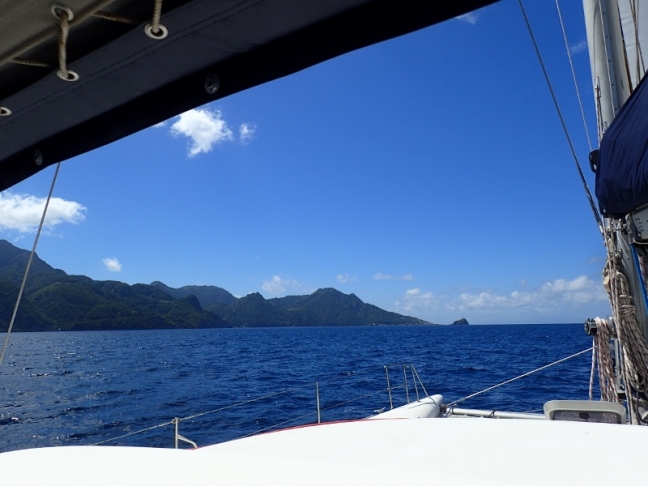