Next stop on the run south was a return to St Pierre at the northern end of Martinique. The soft afternoon light makes the place look like an old Mediterranean city and hints at its past grandeur when it was the Paris of the Caribbean.

Morning light and a different angle of the same bay shows as it is, a ramshackle and bit tatty around the edges town straight out of any Caribbean island. 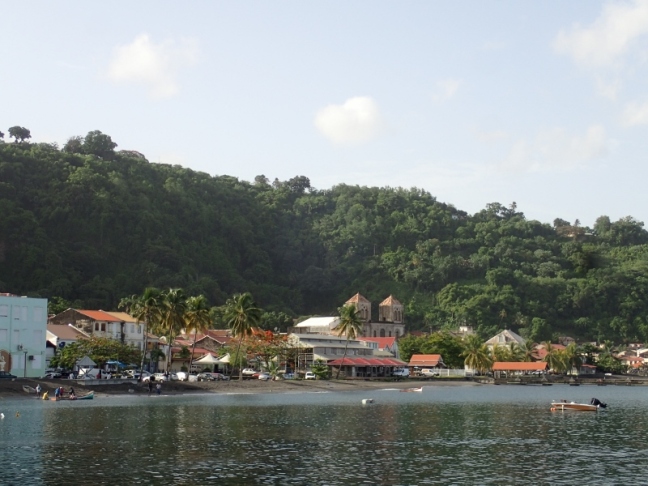 An earlier blog post mentioned the volcanic history of the place. Here sits our lovely boat framed in the window of one of the ruins still standing around the town.

The Martinique zoo was a short but sketchy walk along the main road. Here eagle eyes Amelia has spotted some small frogs along the edge of a path. Apparently we still need to see the zoo even with the abundant wildlife around.

Set in manicured grounds of an old estate the zoo was very good and worth the high entrance fee.

Surprise hit for us New Zealanders were the racoons who you could feed. Super cuties who had perfected the art of standing on their hind legs and begging with their forepaws. North Americans were much more blasé with one of their local animal pests. A bit like possums being loved and protected in Australia, but a hunted pest in NZ I guess.

Abandoned machinery from the estate. Don’t think much modern metal would stand such abuse and neglect.

A jump south to Le Marin. Obviously a pretty popular anchorage! Cool to be close amongst 2 other Casamance catamarans.

We paused here for a few little jobs and last provision at a French supermarket. Really going to miss the French goodies as the next stop is a long one in the English based Grenada for the Hurricane season. Some shelving and a triangle cabinet with no obvious function or even access had baffled us since we bought Drakkar. They were nicely made, but what on earth were they for? Time for a little light DIY and out they came to clear up the companionway.

We made good friends with the lovely French couple Katerine & Rolland from the Casamance Peneque. Great hearing their plans and comparing notes. They know another Casamance that has circumnavigated twice.

After only 8 days in Martinique we were rushing south again. Boat life seems to agree with the kids. Check out Boston’s ab’s in this rare shot where he is not running for cover! I must have got the shot before he realised the camera was pointed his way… An overcast and moody day had a great wind forecast for the overnight run to Grenada. Here we are waving goodbye to SV Peneque.

Reefed jib and main and we are still bowling along fast. The sea is nice and calm behind St Lucia with the Pitons in the distance.

Last time we were these way we had our great friends Ange, Norm, Katie & Neo on board. Miss you guys! We look forward to catching up soon. As if to commiserate with us missing them the mist hung around all day.

The 150Nm trip was much faster than I expected. The budgeted 7kn average was more like 8.5kn so we arrived I the early hours of the morning. Passage plan had Tyrrel Bay, Carriacou as a nice big bay with no hazards. Morning light had us in our conservative night anchoring spot right out the back of the fleet. Nice to catch up with more friends on Blue Zulu who were already in the bay. New friends Pierina suggested the mangrove lagoon in the bay was a nice hidie hole for any weather after they sheltered from the unusual early season Tropical Storm Don that came through while we were still up north. Amelia and I took a dinghy ride to check it out.

Every spot like this has abandoned and derelict boats. Sad to see boats that once held someone’s hopes and dreams now lying abandoned and rotting.

Blue Zulu is a 50 something foot proper ketch. Lovely boat! Peter and I nudged each other to see when we were both leaving for the deep reach down to Grenada the next day. We chose the sail the rhumb line deep downwind and they headed out on a broad reach to tack back. I will admit to keep close tabs on them via the AIS and a few sheet tweaks and from the stories afterwards and their expressions I am sure the same was going on in Blue Zulu. I do like how Drakkar slides along so nicely (and beat them). I had to pull in our trolling lure as the brown boobies were getting excited about it as the circled close to Drakkar looking for the fish we were scaring up.

Grenada at last! 28 Jul had us arriving at the sanctuary at the bottom of the hurricane zone. Ready to meet our friends flying in, YAY! This calls for Cake.

Working our way around the local buses, getting a local SIM and shopping found a few surprises. Great to see NZ stuff in scattered small supermarkets throughout the world. But Seriously? Shipping ground goat to an island with plenty of goats? Nice price premium on the local ground mince of mystery origin so doing something right. We bought the NZ frozen ground beef.

One thought on “To Grenada at Last”